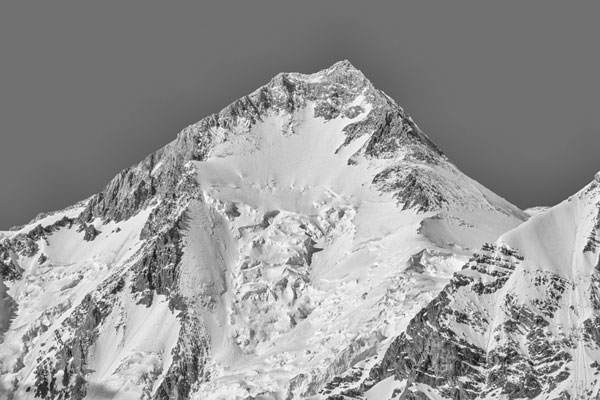 Yes I'm safe back. Apart from 1 degree frostbite in 4 toes (senseless toetips, sense reappears after a month or two - I have tried it before) I'm feeling well and fit. I lost around 5 kg. almost exactly the amount I intentedly put on before going. We reached the summit of Gasherbrum 1 on the July 9. I was there at 9:13 (according to the recordings of my digital video camera which we used both to make pictures for internet and to make film), Mads Granlien at 9:28 and Jan Mathorne at 9:48. I stayed there in almost perfect weather for 45 minutes. We could se around 200 km. from the summit in the clear weather. We were the first to reach the summit this year and we were in front of 5 other expeditions all the time. We fixed rope some of the way up the Japanese couloir using rope from a Japanese and German expedition. The day before summit attempt we put up our camp 3 at 7000 meters in the afternoon. In the evening we slept around 2 hours before starting to melt water for the summit attempt. At 00:30 we started from the tent. There was a cold wind and minus 18 C. so we saw forward to sunrise. The climbing from camp 3 was sometimes rather steep (50 maybe 55 degrees) but we climbed individually. The final wall up to the summit confused us. We could se two summits and I made tracks up to the one on the left which unfortunately was the lowest of the two. I had to come down to a little col between the two summits from where I could go up a corniced ridge to the real summit. Jan and Mads had been waiting and could therefore go directly to the col and up the ridge. When we left Basecamp on July 16. the only one to do the climb apart from us was a German climber, Dieter Porsche. He made it to the summit the day after us. He started with a friend, Peter Guggemos, from camp 3. Peter had a minor accident. He fell down the S couloir (shaped like an S) and was lucky not to hit the rocks along the sides. He should have fallen 3-400 meters before finally being able to stop himself. Peter came back to camp 3 at 4 in the morning just as we were leaving for Basecamp. Dieter made it to the summit alone.

When we left Basecamp weather was again unstable as it was most of this season. Some had left the day before for camp 2 but we suppose they turned around due to the unstable weather. The only good period we experienced was the 5 days we were doing our summit push. We were prepared and acclimatized at that time.