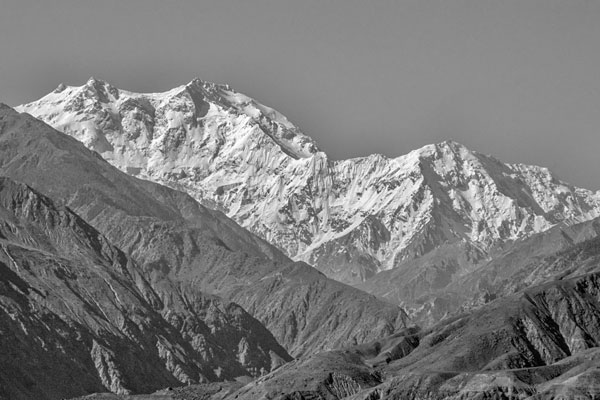 He made it! At 4:12pm on July 2nd, after a month of climbing up and down, then four straight days of climbing unrelentingly up for 10 hours a day (except summit day, when he climbed for 16 hours with no water and nearly no food), Nick stood on the top of Nanga Parbat (8,125 meters) to see...clouds. Doh!

The weather had moved in just before he reached the summit. Although he'd had a month to take in the views, a clear scene from up there would have been amazing. I think at the point of summiting this great mountain, the biggest question on their minds, provided they could still think, was how on earth their bodies were going to get them back down the steep, icy, 50? slopes without ropes. Slopes where if you slip, the only thing below you is a sheer 4000-meter drop, a one-way ticket to Base Camp.

Sixteen hours earlier, the eight climbers got ready to begin their summit bid, but the wind was so fierce, beginning then would have frozen their flesh instantly. So they waited until 4:30am before leaving the safety of their tents. For most of the day, the climbers (two Danes, two Germans, two French, one Pakistani, and Nick, the one American) moved together in a pack. But as they neared the summit ridge, one of the Danish climbers, Mads Granlien, and the Pakistani, Hasan, broke away in a surge of energy.

Hasan is a high altitude porter who greatly assisted in a rescue on Gasherbrum II during last year's climbing season. In appreciation, Peter Guggemos and Dieter Porsche(both German) invited him to attempt Nanga Parbat with the group this year. His strength and endurance shined again, and after four days of eating virtually nothing (he can't stand Western freeze-dried food), he was the first person to stand on the summit this year.

Mads arrived closely behind, followed by his fellow countryman, Allan Christensen, who made it to the top carrying a pair of skis which he ended up carrying all the way back down. The flat late afternoon light coupled with exhaustion would have made a ski descent suicidal.

About 10 minutes after Allan left the summit, Frenchman Michel Vincent shared it with Nick. While they were there, Dieter crawled up, touched the highest stone, turned around and left. Michel followed him. Nick placed a couple of pine cones and stones from his Colorado garden on the peak and put one small rock into his pack in exchange. Then he took a self-portrait and turned around to face the 1000-meter descent back to Camp IV.

By the time he fell into camp at 9pm, joining Hasan, Mads, and Allan, 16.5 hours had passed. Three more hours went by when shouts for help reached the tent. The two French climbers, on the same permit but, technically, on a separate climb, were in trouble.

Michel could no longer lead the utterly exhausted Andre Tremouliere to shelter and was calling for help. He made it to the tents and asked someone to please go look for Andre. Mads, having heard the original calls, had already begun to get dressed (a feat in itself). He stumbled as far as he could, 100 meters from the tent, and shined his torch to lead Andre home. As he moved the light back and forth, something glistened: a reflective strip on Andre's jacket. He was off course, sitting in the snow, disoriented and not moving. Mads encouraged him, meeting him halfway, and led him to the tents.

Peter and Dieter didn't return until 9am the next morning. They'd bivouacked at 7,600 meters having lost sight of the trail first in the clouds and then in the darkness.

The next day Nick and Michel made it back to Base Camp (and Allan and Andre to Camp II) while the others remained at Camp IV for another day. They didn't have someone like me, a wife waiting in Base Camp to massage their backs and rub their feet! I've never seen Nick so finished.

The next day all the others were the same: stumbling into Base Camp, very skinny and sunburned with bloody, cracked lips and wobbly legs. They were dehydrated, starving, and beyond exhaustion.

Days later, the pain subsiding, the healing lips almost allowing them to smile fully, the realization of what they'd done started setting in...and they were already beginning to talk about their next climbs! No!!

As for me, it ranks up there with one of the worst days of my life! It wouldn't have been so bad if the radio, "too heavy" apparently, hadn't been intentionally left at Camp IV without our knowledge. When the clouds set in and the binoculars no longer reassured us all eight figures were still ascending, the entire Base Camp huddled around the devastatingly silent radio for word.

Those of you who have read Into Thin Air, or any other mountaineering book covering a disaster, know a storm setting in during the descent is one of the worst things that can happen (along with getting mauled by falling rock or being swept away by an avalanche). I was worried to the point of nausea for a large part of those 16 hours. It was terrible!

When Nick fell into Camp IV and immediately radioed, I felt close to fainting from relief, but was still so worried about his impending descent. It wasn't until a full day later that I realized what he'd accomplished. And I guess without ever doing it myself, I'll never fully know what these guys went through. I'm satisfied with just being really proud of every one of them.